Trying to plan a birthday party for someone who loves science and adventure?  A little bit of Indiana Jones, MacGyver and Mythbusters?  Well, I was, and this is what we did for his 7th birthday party!

While trying to brainstorm what to do for this party, I realized that my favorite parts of science (as a kid) generally involved things blowing up, on fire, frozen, or changing colors.  As an adult I found myself increasingly astounded at God’s amazing creation in even the tiniest of life’s details.  But since kids love big bangs, I decided to bring as much of that as I (safely!) could into our party.   (I seriously would love to do this experiment (Mythbuster’s methane bubble fire) but I don’t think our landlord would appreciate the fire hazard!)  A few perusals around the Internet reminded me that dry ice is a bucket of fun waiting to happen!  And for the explosions, we went with the Mentos and Diet Coke experiment.  And nothing says “fun” like a glow-in-the-dark treasure hunt, right??  The following is basically a list of the experiments we did in the order we did them; we did a lot because with a crowd of kids running the gamut between 2 and 9 years old we had to plan for a very short attention span.  If you have older kids you can spend more time on each, and for some you can even let the kids be in charge.  If you like, you can just copy the whole itinerary and save yourself the planning!  🙂

As the kids arrived, they were armed with official nametags, a pad of paper and a pen, to write down their observations (and the clues!).  Here is a complete list of what I bought for the party:

I started explaining that things aren’t always as they seem.  Scientists use many tools to explore and observe the world around them.  We have a great USB microscope that I used before the party to take very up-close pictures of everyday objects, then printed them out.  As the kids were still arriving, we passed around the pictures and they had to guess what they were (the kids had a really hard time with this one, to my surprise).  This led to my next phase which I began by passing around closeup pictures of US money and the money itself, and the kids had to find where on the money the picture came from.  We also busted out the UV flashlights and discovered which parts of the money glowed (best to have old and new money designs for this).  Lastly I asked them to tell me what four of the pictures had in common, which was the color green, and asked them to write it down since it was a “clue.”  If we’d had older kids I would have let them use the microscope and find some of the trickier microprinting on the money.  Lastly we looked at pictures of Mentos and passed some around and asked the kids to observe how the fruit and mint Mentos looked different (to tie in the “nucleation sites” for our explosions).  If we had needed to fill up time I would have spent more time with the Glitter Bug lotion, having the kids wash their hands, then use the UV light to see how much was left, etc. (As it was, we mostly used it to decorated the “monster cave”)

We next went to the kitchen where I had a challenge: Identify what I had in my cup, and how it got that way.  I had spent two days making a “naked egg” beforehand and it took a few guesses before they knew what it was!  Very cool looking and feeling.  Then I showed them an egg I had started the day before as a clue to what had happened to my naked egg.  In short, over two days, an egg surrounded by vinegar will have its shell “bubbled” away, leaving a toughened membrane.  Very much like a water balloon.  The 1-day egg was partially dissolved and covered with bubbles.  The kids figured it out!  If I had older kids I would have explored whether or not the Calcium ions in the vinegar conducted electricity…:)  There are lots of fun things to do with naked eggs, but this is all we did with ours.

I moved from egg bubbles to dry ice bubbles.  I asked the kids to watch a small piece bubble away and tell me their guess as to what the dry ice was made up of.  After a little talk, I explained that since we can see it’s completely gone and leaves only smoky-looking air behind, it’s possible to guess it’s frozen air (actually frozen carbon dioxide).  Then we copied some of Steve Spanglers dry ice experiments (I love this website) – using soapy water to make soap dry ice bubbles which the kids loved popping, and the “crystal ball bubble:”

(which was trickier than expected and I should’ve practiced before the party; also a good experiment for older kids to try by themselves).  There are just so many fun things to do with dry ice!  PS – I bought my dry ice the day before, a nice 10 lb chunk of it, and kept it in my deep freeze.  Half of it was gone by the party, and my ice cream was rock hard.  Just to keep in mind…

I don’t know what brilliant mad person first decided to add candy to soda (not my first thought!) but I’m so glad, because this experiment is so safe and so fun!

First, we took out all of our soda bottles looked at them with the UV flashlights.  Tonic water, the stuff with quinine in it, glows in UV light.  Very cool.  Then we add a mentos candy to a cup and asked them to tell us what they observed.  Bubbles again!  So began our fun experiments with exploding pop.  After they observed bubbles, I asked them to solve a puzzle: how to get soda out of the soda bottle without touching it?  Yup – Mentos!  We started with the tonic water in a bowl, turned off the lights, and dropped in the Mentos for a glowing explosion!  Then (since I think tonic water tastes awful), we dumped it out and put the soda bottles, one at a time, in a big punch bowl (see above for picture of bowl), then experimented with 1 non-mint Mentos and 1 mint, which got one bottle of soda into the bowl.  The next bottle got two mint Mentos, and we almost hit the ceiling with the last bottle and 3 Mentos.  Note: I purposely chose clear or light-colored sodas for this (Mello Yello, Cactus Cooler and Squirt) because they don’t react as much and I actually wanted to make punch!  This was a lot of fun and the kids loved getting almost wet.  🙂  Then it was time to go outside with the big guns: Diet Coke and the Geyser depth charges.  While the kids got their shoes on, they watched this video experiment on what works the best.

We used two, one loaded completely with Mint Mentos, one loaded with rock salt.  Kabloomey!

(sorry no shots of the soda height, I don’t want the kid’s faces on the Internet 🙂

So much fun!!  Now our next part was to take place outside, but it was still raining so we went inside and the kids watched the Mythbusters “Mentos and Diet Coke” episode on Netflix. I had to fast forward, but here’s one part of the show:

After that, I asked the kids to remember which clue they had written down (“green”).  I had put a marble in a cup and filled it with green juice (from my Power Juicing kick ;); two other cups had milk, one which had been colored pink.  Then one of them volunteered to drink the cup all voted for (the green one) and at the end they found the marble.  This gave them the clue they needed to choose which little treasure box to open and get the next clue (purple in this case!).  The note said “Go outside” – not very creative – but at this point my juices had been running dry. I’m sure you can come up with something better.  🙂

The kids went outside into the backyard.  We had planned several hazards for them to go through, using our swing and kiddie pool, but time was getting tight…and it was STILL raining.  This could be a really fun time, finding clues hidden around, using dry ice in the kiddie pool, etc, but we couldn’t.  Sigh.  So we went right ahead into the “finding the treasure” part.  Here, we had taken our garage and made a covered pathway for them to walk through, decorated with glowing bats and the Glitterbug lotion (complete with glowing footsteps leading to the treasure box!).  The kids had to take turns, so they came in in pairs each with a UV flashlight.  They followed the UV signs to a “cave” made with sheets and chairs (ps – quilt batting covered in glowing lotion makes awesome mood pieces!) and on top of the treasure box sat our monster pinata, covered in glow lotion.  Then the kids hid and made noises for the next batch coming through.  Very fun, but unfortunately the parents had to wait outside in the rain.  After everyone had a turn, the monster “fled” back outside and the kids explored the treasure box, which had my son’s rock collection and lots of change, while my husband tied up the monster.  Then all the kids had fun beating it til it gave up its candy hoard.  🙂

Fun times!  And everybody shared with the little ones who hadn’t been able to get the candy…so sweet to watch…

We trooped inside and cut up our cake and ate it along with our super bubbly punch (the last of the dry ice).  I really didn’t do much in the way of cake decoration, but some of it was neat so I’ll mention it. 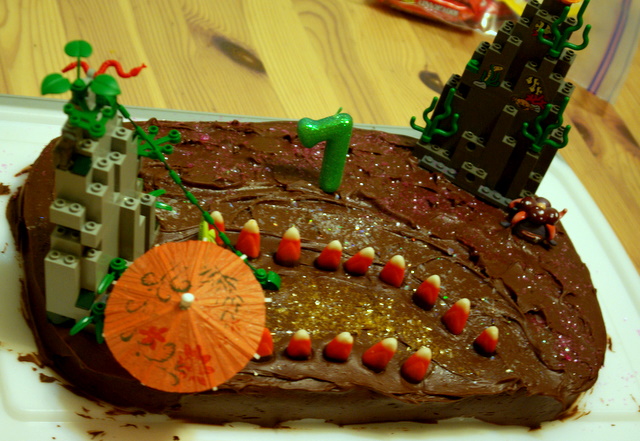 We bought a few pieces of Lego that was “adventure” background styled, then I used edible glitter to show “sand” “sea” and “shore” added candy corn and voila! – a very very quick and easy cake to decorate!  I found the edible glitter at our nearest specialty baking store.

We gave the kids a glowing slappy hand, a tube of Mentos, and all the candy they had gotten from the pinata (as well as their notebooks and pens) as their goody bags.  The kids went home apparently quite happy.  😀

And we had smoothies for dinner and played. Here is what my daughter thought the glowing bats needed afterwards:

I’ll have you know, Mommy needed that in spades after the party too!!  🙂  After all that work I decided to write it down;  my last “how-to” on a bug-themed party seemed to be appreciated so I thought this might be too.  😀  And here is our Easter Picnic party for more ideas!